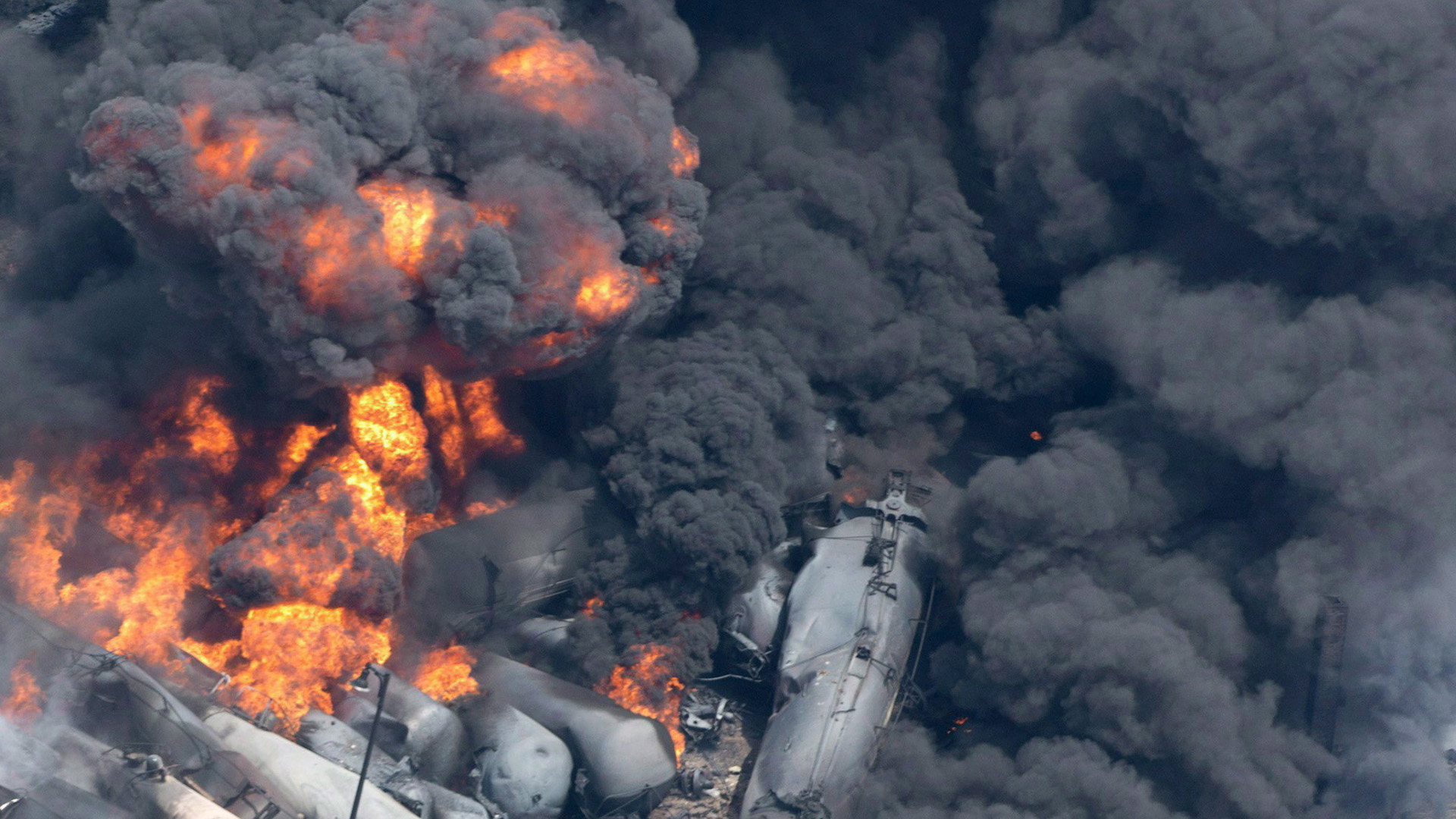 The Disaster of Lac-Mégantic

On the evening of July 5, 2013, Thomas Harding, a locomotive engineer working for the Montreal, Maine and Atlantic Railway (MMA), parked his heavily laden train near the small town of Nante, Quebec, Canada. Hardy was the sole crew member and was therefore responsible for operating the five locomotives and 69 cars carrying high-grade crude oil to a refinery in New Brunswick. At the end of his shift, Hardy shut down the engines in four of the five locomotives and set their brakes.

An engine had been running poorly throughout the day. It was spewing dark black soot and oil droplets from its smoke stack. Hardy contacted the railroad traffic control center, reported the mechanical issues, and advised them that the train was secured on the main track. Hardy and the traffic controller agreed that he should leave the faulty engine running throughout the night and investigate the mechanical issues in the morning.

The tracks at Nante are not flat. The 1.2% grade is steep enough for trains to roll if not properly secured. With the lead engine still running, the air brakes would remain pressurized keeping the train in place. For added safety all train cars are equipped with manual braking systems. Transportation safety regulations required that enough handbrakes be applied to the individual cars to keep the train in place, with or without the air brakes. Setting all the hand brakes, however, would require Hardy to walk the length of the train, manually engaging each hand brake along the way. At three minutes per car, applying all the hand brakes on a train this large would take hours for one man. Instead, Hardy set the hand brakes on only a few of the cars, walked to a waiting taxi cab, and departed for his hotel.

Before midnight, a passerby in Nante noticed flames coming from the smokestack of the idling locomotive. The person called 9-1-1 and Canadian dispatchers sent police and firefighters to the scene. By the time a firetruck arrived, flames were pouring from locomotive’s smoke stack and black smoke was thick around the engines. The firefighters quickly extinguished the fire, shut down the idling engine, and contacted MMA about the incident. In response, MMA sent a track maintenance representative to investigate. Once there, the maintenance representative reported to police and MMA that the train was secure. Everyone departed before 12:30am.

With all the engines shut down the air pressure in the brake lines began to decrease. At 12:56am the air pressure was insufficient to hold the train and the 74 cars started rolling down the tracks toward Lac-Mégantic. Without engine power the train had no lights and no automatic brakes. The 10,000-ton train quickly built momentum.

At 1:14am the train entered the town of Lac-Mégantic. The speed limit for trains at the bend in the center of town was 10 mph but the train was racing at 65 mph by that time. When the train reached a sharp curve it immediately jumped the tracks and careened into nearby shops and offices. Nearly all of the tanker cars followed leaving the tracks one after another at the same corner. The tankers smashed into one another rupturing their containers and bursting into flames. Thousands of tons of burning fuel poured through the streets of the small town, into buildings, down the town’s storm drainage systems, and across an adjacent lake. One fire ball after another engulfed the downtown region of Lac-Mégantic. Forty seven people were quickly incinerated in the flames. A local café was completely engulfed along with all its occupants. Explosions were felt miles away and flames reached hundreds of feet into the sky.

150 firefighters were summoned to the accident scene. Flames and explosions raged for hours throughout the town, and it took two full days to completely extinguish the burning homes, offices, shops, and fuel. Thousands of the town residents were evacuated and most of the town’s 100+ downtown buildings were completely destroyed. The Lac-Mégantic disaster is the deadliest freight train accident in Canadian history.

The Trial for Criminal Negligence

Four years after the accident, in September 2017, Thomas Harding, and two of his colleagues, Jean DeMaitre and Richard Labrie, were put on trial for criminal negligence. In the case the prosecution argued that all three men knew about the train’s mechanical issues and that none of the men took proper precautionary measures to secure the parked train. The trial stretched several months with scores of witnesses and expert testimony.

On January 11, 2018, the jurors started their deliberation. Should Hardy, Labrie, and DeMaitre, be found guilty of criminal conduct and sentenced to prison? That question vexed the 12 person jury. On January 19, after eight days of deliberation and multiple expressions of impasse, the 8 men and 4 women jury came to the verdict of not guilty. The state had not proven beyond a reasonable doubt that the men were guilty of a crime.

As with any large-scale tragedy, there are lessons for experts in the ashes of Lac-Mégantic. Experts of almost every discipline face situations where they must bring objects to a stop, and once stopped they must keep them stopped. Oncologists try to stop the ravages of cancer and keep their patients cancer free. Technology professionals work to stop computer viruses and thereafter ensure their corporate networks remain clean and secure. Environmentalists try to stop global warming. Law enforcement officers try to stop violent crime. Civil rights activists seek to stop racism. And on. Here are just three ideas which experts may consider when moving and stopping objects or problems in their disciplines.

1) Nothing stays at rest forever. Isaac Newton’s first law of motion says that every object will remain at rest unless compelled to change by some force. This may be true, but everything is being compelled by force to change. Forces tug on people and objects without ceasing. Our entire world is a place of turbulent change. Trains and automobiles have parking brakes because they will always yield to gravity. Boats have anchors because they will yield to the tide. Few objects are truly static or stationary. Things move. Nothing stays in one place forever.

2) Don’t move objects if you can avoid it. Trains, obviously, must move. They exist for the sole purpose of movement, but not all objects are so. Experts might always consider measures which minimize movement. New products should be designed with the minimum number of moving parts, and processes should also minimize possible movement.

An interior home painter once explained to me that he avoids removing objects from surfaces before painting. If a handrailing is mounted on wall, he paints around it. If a light fixture is mounted in the ceiling, he paints around it. “Once you move something,” he said, “there is a good chance you’ll never get back in the same place. You are far faster and safer if you don’t move something in the first place.”

3) If you must move something, ensure there are multiple ways to stop the movement. As demonstrated at Lac-Mégantic, once a train starts to move it can be difficult to stop. The MMA train had five cars with propulsion and 74 cars with brakes, but even that was insufficient to divert the catastrophe. Experts should never start something unless they are equipped with multiple means of stopping it.

This rule applies to moving people as well as objects. Moving objects can be dangerous, but moving people can be catastrophic. The law of unintended consequences states that unforeseen outcomes frequently follow purposeful action. People are dynamic creatures. They can be moved physically, emotionally, and psychologically. Once people start something, we can be terribly ill-equipped to reverse the actions. Experts should never start an action if they are not certain they can stop it.

The disaster at Lac-Mégantic is an unambiguous example of the perils of uncontrolled motion. Forty-seven people lost their lives. Their families and loved ones will never be the same. Thomas Harding, Jean DeMaitre and Richard Labrie may have been acquitted of criminal negligence, but they too paid an emotional toll for the disaster. May all experts in all disciplines avoid similar circumstances.