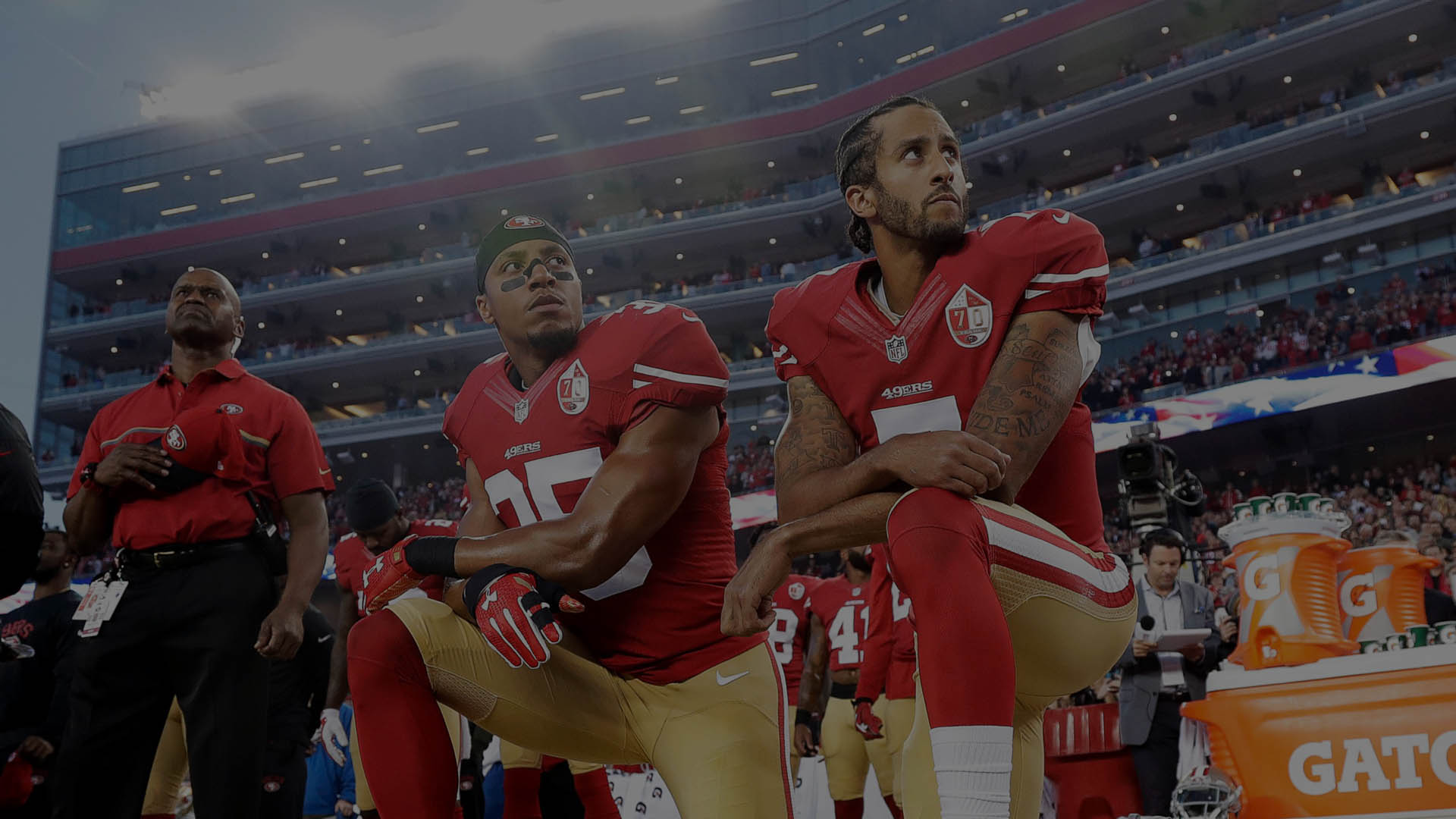 The Danger of Speaking Outside Your Expertise

Whether you are a doctor, a lawyer, a lawn care professional, or any other expert, you should glean some important lessons from the NFL Anthem protests and the fallout that surrounds them. Missing in national conflict and heated rhetoric are some critically important lessons about what can happen when experts in one field opine publicly about subjects outside their expertise. Experts of all stripes should pay attention. This is one way for things to go bad--very bad.

The NFL is filled with experts. The league has some of the most gifted, talented, and disciplined athletes in the world. They are well-paid and given global visibility. Many people are highly interested in what they do and say. Consequently, players are frequently asked about subjects beyond the sport. They are asked about entertainment, fashion, culture, politics, and so on. Many players use their unique platform to speak for causes they support or on subjects they strongly favor. And, of course, in America they are well within their rights to express themselves on any subject they wish.

As important as all these subjects may be, another urgent message is being missed. Few people are absorbing some of the truths concealed in the controversy. Here are my top three lessons for experts from the NFL Anthem protests.

Lesson One: Communications are fraught with misunderstanding and difficulty.

Following President Trump's rebuke of players who kneel during the National Anthem, Eric Reid, a strong safety on the San Francisco 49ers, who frequently knelt beside Colin Kaepernick, wrote an op-ed for the NY Times. In the article, Reid said, "It baffles me that our protest is still being misconstrued as disrespectful to the country, the flag and military personnel."

Undoubtedly many experts, inside the NFL and outside, feel the same way. How can kneeling, which is a symbol of reverence and respect in many settings, be interpreted as disrespectful during the National Anthem? Well, frankly, it can be. That fact should not baffle anyone. I will gladly take Reid at his word that he means no disrespect. I accept that. The point here is not about what Reid meant or what Kaepernick meant. The point is that people will draw their own conclusions and you, as the expert sending a message, cannot control these conclusions. You cannot control the deductions nor the interpretations. People will listen to your words, observe your behavior, and determine for themselves what you mean. It should not be lost on anyone in the United States of America, fan, player, or otherwise, that if you do not stand and quietly face the flag during the playing of the National Anthem there will be some, not all, but many, who will conclude that you do not value the flag nor the nation for which it stands.

So, I point all experts to the invaluable advice of the Finnish Professor, Osmo Wiio, who published his Laws of Communication in 1978. He said, "If a message can be interpreted in several ways, it will be interpreted in a manner that maximizes the damage." Experts should know that everything they say and everything they do will be interpreted through the observer’s pessimistic, critical, and over-sensitive lens. In most cases, people who listen to you will draw the wrong conclusions and they will continue to draw the wrong conclusions until you make it impossible for them to draw any conclusion except the right one.

The entire NFL roster may kneel during the National Anthem. That is their prerogative. But they should not be surprised when people take offense. People will continue to interpret a message in the way that does the most harm. It is an undeniable law of communication.

Lesson two: Experts hurt themselves, and others, when they stray from their expertise.

As an expert, you have a sphere of excellence, a mastered subject or skill. Above all other domains, this is your turf, your home court. On that home court, you are recognized for your expertise. You have worked for years or decades to perfect your skills. This is where you are at your best. When you stray from your acquired position of strength, you become vulnerable—more so than many experts believe. Being strong in one field does not necessarily make you strong in another. To the contrary, having a strength in one area may actually make you weak in another. Experts who wander from their fortress of experience, skill, and knowledge are subject to doubt, disbelief, suspicion, insult, ridicule, and attack. Your opponent knows when you are weak and will waste no time exploiting your vulnerability.

It is easy for experts to think that their dominance in one field makes their opinions in another field more valuable. But the opposite is true. Experts should expect that their recognized excellence in one field will not automatically produce influence in another field. When a heart surgeon tries to give advice about home decorating, or when a plumber talks about tax law, the expert surgeon and the expert plumber is often dismissed. Waxing philosophical on a subject which is clearly outside your expertise makes you look like an arrogant know-it-all and it detracts from your true expertise.

Experts of all stripes should retain their stronghold. Why work for years developing a knowledge or skill only to set it aside? Experts who frame every question and every message into their domain will serve themselves, their colleagues, and their audience with maximum effectiveness. Stick with your own field of expertise.

President Trump obtained national attention in 2004 when he starred in the reality television show "The Apprentice." Each episode included an abrupt, calloused, and public termination of the show's contestants. With finger and thumb extended in the shape of a pistol, Donald Trump pointed at candidates and barked, "You’re fired!" This public termination may be exactly what the President had in mind when he asked NFL owners to terminate players who kneel during the Anthem.

Ironically, when the President called upon the owners to terminate players, he failed to acknowledge that the owners had already done what the president suggested. Their approach may not have been televised, but Colin Kaepernick, the instigator of the kneeling protest, was already out of his job. The message was already delivered to the league that players may protest if they wish, but if they did they shouldn’t expect to stay on the team roster. Eric Reid acknowledged as much in his NY Times op-ed when he said, "[Kaepernick's] unemployment has nothing to do with his performance on the field. ... I am aware that my involvement in this movement means that my career may face the same outcome."

At least Reid recognizes that he is walking through a minefield when confronting subjects outside his home court of expertise. But not all experts are as aware of the dangers that surround them. As an expert, every time you step outside your field of expertise, you assume risk. There is a high likelihood that someone will be offended, confused, challenged, or alienated by your actions. Maybe the cause you endorse outside your expertise warrants the risk. Eric Reid believed his protest was worth the potential ramifications. It should be clear that risks do exist and that they are rarely as apparent as the risk of protesting the Anthem.

When you stray from your expertise and make even veiled or benign comments about public policy, social norms, or any controversial topics, you assume risk. When you criticize a leader, or take up a cause, no matter how noble it may be, you place yourself at the mercy of your audience. You no longer control your destiny as an expert. You are forfeiting your hard-earned expertise to the cause you now espouse. Is that what you want to do? Maybe it is, but don’t pretend that your causes and your expertise are separate. They are not.

People who sit in positions of power rarely act like President Trump. The President may find pleasure in saying, “You’re fired!” but very few other people do. Instead, if you alienate enough people, your influence as an expert will simply melt away. You will have less control and less influence. You will be left as an empty shell. Not because you lack expertise, but because enough people don’t want to hear about your social agendas.

The consequences of the NFL Anthem protests can teach every expert the importance of being cautious. You’ve worked for years to develop your skills. You’ve risen through the ranks and distinguished yourself. Now that you have reached the apex of your expertise, do you really want to throw it away over a social cause, or worse yet, a pet peeve? If so, great. Good for you! But don’t believe that you can have it both ways. You cannot stand on a soap box today and expect people to pretend it did not happen tomorrow. Treat your expertise carefully because it did not come easily.