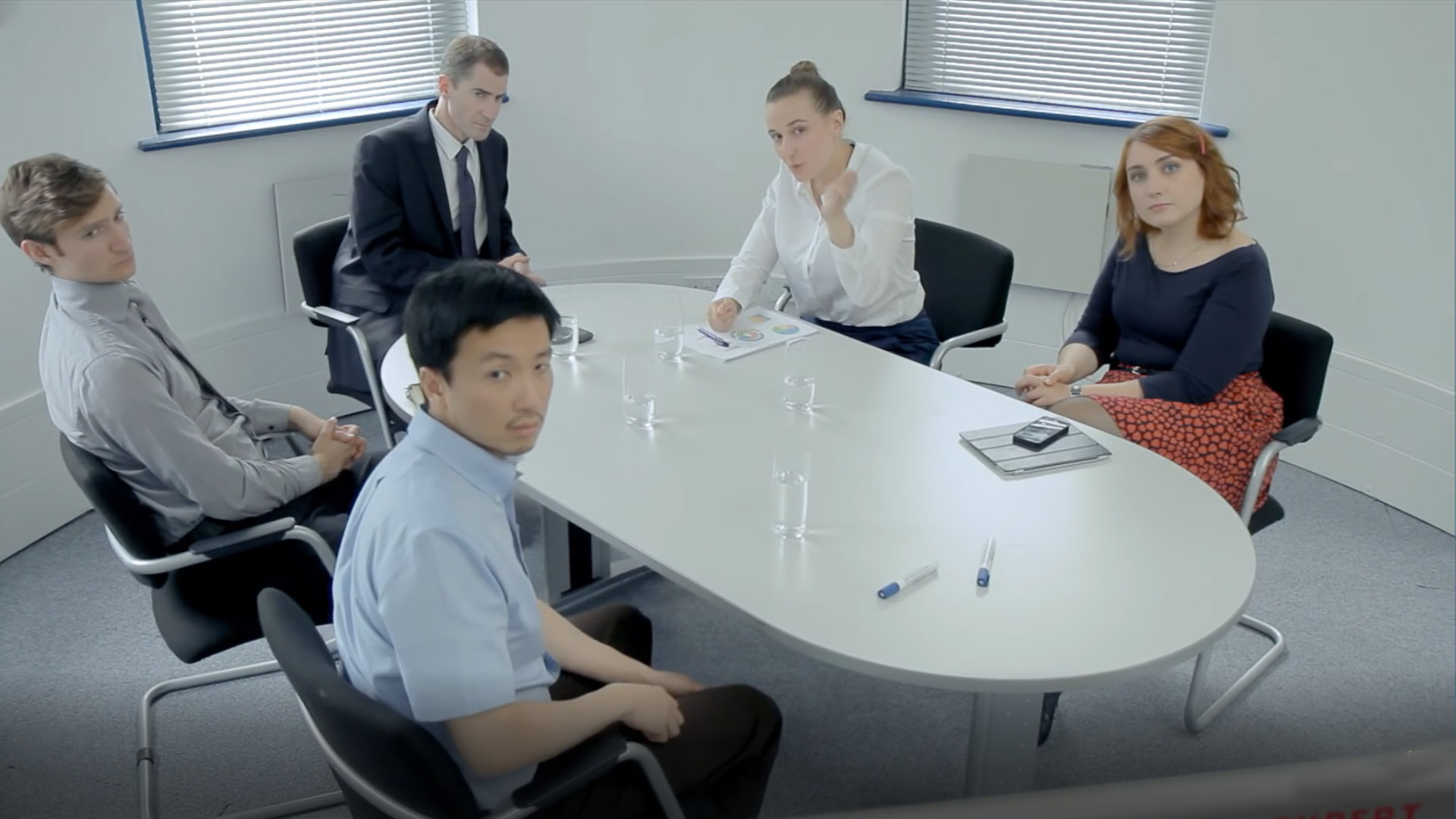 Lessons from "The Expert" Comedy Skit

This English language version of a skit originally produced in Russian, portrays five people in a business meeting discussing the requirements for a project. The video highlights some of the difficulties faced by subject matter experts and openly mocks nonexperts. It quickly became popular online and has been viewed tens of millions of times.

In the years since its release, the video has amassed large scale support. Most reactions to the video applaud the wisdom of the expert and point out the lunacy of the other characters. An article on cNet, for example, summarized the typical reaction, “This is how an engineer feels when he’s surrounded by idiots.” Expert gloating, unfortunately, does not help subject matter experts who genuinely want to excel in client meetings. Imbedded in this skit are at least ten lessons which all experts should consider to better understand their roles.

In the skit, the first word out of Anderson’s mouth, indeed his first utterance, is “no.” Experts should never start with a “no.” Of course experts must say “no” from time to time, but they needn’t start with it. And, as if starting badly was not bad enough, one minute later Anderson uses another negative word which should be forbidden from expert vocabulary, “impossible.” Anderson, the expert, uses the words “no” and “impossible” before asking his first question. Colleagues cringe when experts do this, and with good reason. There are endless accomplishments which occurred after experts declared them impossible. David Ben-Gurion, the first Prime Minister of the State of Israel, put it this way, “If an expert says it can’t be done, get another expert.” Experts should never, ever, start with “no.”

When a project’s requirements are soft, ambiguous, or contradictory (which they often are) the expert should recommend easy options. Experts should never impose or accept difficult requirements if they are not actually required. This should be so obvious that it needn’t be mentioned. But Anderson, the expert, heard “seven perpendicular lines” and then imposed his own requirement that all seven lines be perpendicular to each other. In this case the requirements were as flimsy as tissue paper. Anderson could have recommended any number of plausible options, but he imposed the hardest one. Experts often make things far harder than they need to be.

Lesson#4: Great Experts Represent Their Organization's Skills, Not Just Their Own

When the client asked for a line to be drawn in the form of a kitten, Anderson claims it’s impossible. “A line and a cat are two entirely different things!” Well, no kidding. She didn’t ask you to magically make a cat. She asked you, the line expert, to draw a line in the form of a kitten. What is Hello Kitty if not a few lines in the form of kitten? Just because Anderson can’t draw kittens (a simple task which brings into question his overall expertise) doesn’t mean his entire organization is void of cat-drawing skills. In this case Anderson rambles about his skills and fails to expand his vision to the skills of his entire organization.

Lesson #5: Be Aware of Definitions

Don’t assume that your definition of a word or phrase is understood in the same way by all parties. This is particularly important when working across language or cultural boundaries. Many problems occur when people define words differently. There is a lot of discussion in the video about what it means for two lines to be perpendicular but there is no discussion about the definition of a line itself. While Anderson emphasizes the difficulty of drawing seven perpendicular lines, he never entertains the difficulty of drawing one single line. A high school algebra teacher will tell you that a “line” is straight and infinite. The customer did not ask for “line segments,” she asked for “lines.” What definition are we using?

Lesson #6: Embrace Your Role As an Expert

Be prepared to respond graciously when asked questions outside your particular field. Experts should be flattered when people ask for their opinion. Anderson acts aghast that the customers and colleagues do not know precisely where his particular skills begin and end. It is not as obvious as the expert may suppose.

Unfortunately it took Anderson five minutes and the impolite prompting of Walter before he offered his first recommendation.

On this subject, Anderson is inconsistent. Anderson is not fazed when his colleagues condescend to him with comments like, “what are we in kindergarten,” and “You are the expert.” Nor does he respond negatively when the client is patronizing. But, when project requirements are ambiguous Andersen gets rattled. Don’t get wound up in stressful situations.

Some experts assume their company expects them to tell the client only what the client wants to hear, even to the point of lying. It is never a good idea to lie about what you can and cannot do. Anderson concludes the video by claiming that he can do anything. He is either being sarcastic or he is lying. Neither option is good. Don’t make that mistake.

Anderson’s sarcasm may be funny in the video but it often ends poorly with clients. Don’t do it. You can be sarcastic with your friends, but when it comes to client meetings don’t do it.

It is easy to mock the idiocy of the non-experts in this video. Any project manager who watches will recognize that he is being mocked. A creative director or sales director will see that they are being mocked as well. What is truly remarkable, however, is the fact that the expert is also being stereotyped and mocked along with everyone else, yet very few expert viewers allow themselves to see it. Most experts think the skit is funny because they are smart, like Anderson, and everyone else is stupid. The joke, however, is on the expert because the mockery of the expert is subtle and few experts are willing to acknowledge it.